*This Piece is holy stuff, Hard to find, Most Rare*.

The famous Look Om Pong Plai Kumarn of LP Sakorn, Wat Nong Grub, from the now extremely preferred and highly sought after 73th anniversary edition, which contained a large quantity of some of the very last remaining Pong Plai Kumarn Powders of LP Tim. The amulets of Luang Por Sakorn are now an extreme rarity since the Passing Away of the Great Luang Por Sakorn, and prices are rising so fast to approach those of his predecessor and mentor Luang Pu Tim Issarigo, of Wat Laharn Rai.

Released along with the Pra Kring Chinabanchorn Buddha Amulets made to celebrate Luang Por Sakorn’s 73th Year (2554). We appeared in February to get some, and saw that these were all that were left at the temple. Now. stocks are completely depleted at Wat Nong Grub the same Month of its Release, as are most of the preferred editions of Pra Khun Phaen Amulets. STAMP NUMBER 3 and hanf write? with limited edition? 999 piece made series code stamp is inserted within the Look Om

The Look Om are in our opinion, indeed as stated, made from the finest Plai Oils and Powders, second to none in this day and age. As far as Look Om are concerned, these are the finest available in this or even a much higher price range, from any Master. The look Om amulet comes with original box from the temple of Wat Nong Grub.

Biography of LP SaKon:
LP SaKon of Wat NongKub, Rayong province was born on 3rd February 1938. Now he is 68 year old. He studied magic and supernatural with Mr. Lor and Mr. Thad when he was young. Also, he regularly served LP Tim of Wat LaHaanRai. As he grew into a young man, he gained possession of supernatural powers, which he never used to destroy others, but always to help his peers. He was ordained at the age of 20 at Wat NongKrah. After that, he went to Wat LaHaanRai for the Buddhist Lent, where he became a disciple of LP Tim in order to dedicate himself to learning holy disciplines and Buddhist supernatural powers from LP Tim. LP SaKon is only one who succeeds in making the amulets and magic from LP Tim who has demonstrated an exquisite spirituality and incredible Buddhist supernatural powers. LP SaKon studied until he had developed a clear understanding of these matters and was adept at performing them. And then he had developed expertise in the supernatural matters that he had studied, a love of these aspects led him to seek instruction from the Venerable Father Peng Sasano at Wat Lahaan Yai. LP SaKon received advice from the Venerable Grandfather Tim to go and study with LP Hin at Wat Nong Sanom, during which time he was blessed by the Venerable Grandfather Hin’s imparting of his knowledge. After his study of the supernatural with the LP Hin, LP SaKon travelled to study with LP Som at Wat BanChong, until he had completed. 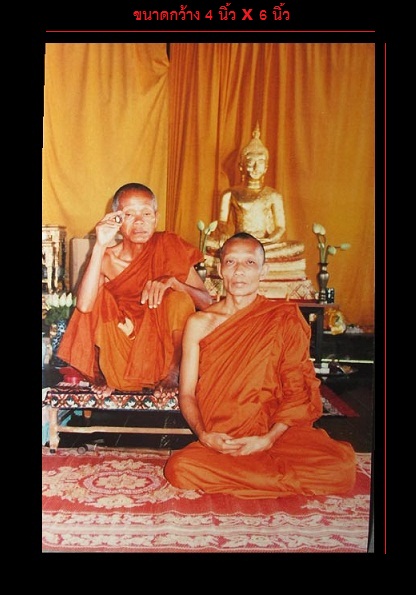 LP SaKon further studied with various and many great masters in the use of supernatural powers including both monks and laymen. In 1965, LP Kliangtham Thiyo, the ninth Abbot of Wat Nong Kub, passed away and the inhabitants of NongKub travelled to see LP Tim at Wat Lahaan Pai in order to entreat for the return of LP SaKon Manunyo to become the Abbot of Wat NongKub. Even though he had become the Abbot of Wat Nong Kub, he did not forsake LP Tim as his mentor and often returned to pay respect and always see to the care of LP Tim until LP Tim passed away in 1975 at the age of 72 years old.

It is a mantras phonetic Praying word to consecrate and control power of this item. If temple give khata with item. I will do it to audio MP3 file and send to buyer within 7day after package ship out. If buyer not received please email to Ask me again.T PLAI KUMAN POWDER ??????????? : is meaning powder which mixed with cemetery soil and other holy place. It is the most essential composition of Powerful amulets in thailand.

The PLAI KUMAN POWDER is very popular in thailand because have to Created by Famous monk him self. Monk will instruced his a close disciple to locate the corpse of a pregnant woman who had only passed the cremation ceremony on Tuesday.

Furthermore Famous Monk also mixed with the burnt head bone of the dead fetus, a number of other sacred Powders (including somdej wat rakang powder, Jindahmanee of wat kangbangkaw, 108 different herbs and sedges) and the important objectivity is Sacred Soil from many Cemetery pace.

The mixture was chanted for day on end before being each pressed into the molds of his amulet. This was required in essential composition to created this sacred PLAI KUMAN POWDER!!!