Size : See on photo, if not clear please email me

This is knowed on Relic of ARAHA (SINT in buddish age) name PHA-SAN-KA-JAI.. After he pass away his bodies part change to netrue stone with this shape and? scatter to around buddish land in the world .

Thailand's amulets are becoming very popular today because believed magic amulet worn by people?to protect themselves from negative energies, evil and injury, and also brings Lucky, Wealth with a supernatural power of ancient magic inside.

Million of thailand people (Celebrities, politician, athlete, Businessman, etc) still believed in Sacred Amulet will help who worship pass bad situation and resolved all crisis in life. It also protect Evil or Bad spirit can not back to attack you in future.

It is a mantras phonetic Praying word to consecrate and control power of this item. If temple give khata with item. I will do it to audio MP3 file and send to buyer within 7day after package ship out. If buyer not received please email to Ask me again.

Phra-Sangkachai or SanKaJai Buhhda is known as the Wealth and happiness god.

SAN-KA-JAI is one of God in religious. People believe in him. He is the symbol of kindness, happiness and mercy. His power bring rich and money wealth. he has a great power, when people meet the difficulty, they will turn to it for help and relief. So it will bless you a lot!.

On the time immemorial the SAN-KA-JAI Buddha is thought to bring good luck and symbolises happiness and joy as well as wealth and prosperity.

That is a beautiful of multi color Buddha relics. They have many color represents the Bones of the Buddha after cremate. It was acquired from which miraculously appeared in a temple of Chiang Mai in Northern Thailand. The stone Has the relics on the surface. It is believed that the relics was from one of the famous monk.

You can see there are alot of glowing relics appear on this stone.

Thai people believe these relics are the parts of buddha and represent the buddha power. Powerful to heal from black magic or anythings that will harm the owner.

All of color have mean.

-Golden. orange, yellow color granules are believed by many to have originated from flesh, also believe it’s the “gold" (yellow) color represents the unexpected wealth.

-Red color from blood also believe it is the “fire” in five elements. Red color represents love and health.

-Pink, white, limpid colored gem-like ones from the Buddha's head. it's represents the “water” in five elements. pink color represents knowledge and potential.

-Rare blue, violet, black color relics are originate from the space between the Buddha's ribs, and also believe it's the 'earth' in five elements represents interpersonal relationship and self-confidence.

-Green, brown color is mind of buddha and also believe it represents the “wood” in five elements. Green color represents wealth and fortune.

Thai people refer to these relics as 'PHA-TART' or PHA-TAD'. Some one believe the relics can grow, many monks tell me they don't know how the relics can grow more a little bit in every year if you put in water, it still mystical. This is real natural buddha relics not glass or plastic. It can increasingly (Growth).

This is perfect Relics of Buddha stone to your collection. They good for Lucky and protect owner from the danger and bad piritual. In thailand them will have high costs but now we lease on ebay for pecially price less. Nicely detailed and not has fragmented. Wow perfect Condition!!!.

If you want more information or have question , please email to us. I will answer any question you might have to the best of my ability. 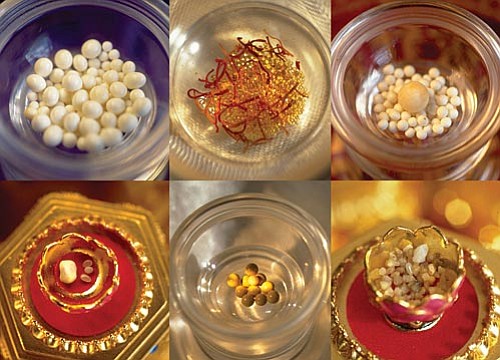 The Meaning of Buddha relic
A relic is generally a small shiny round object which may weigh only a gram, but is as glistening as lapidarian jade. An authentic relic of the Buddha can perform marvelous feats. It sometimes illuminates with radiant light. Its power can make miraculous phenomena occur. It also can replicate, vanish, and merge by itself.

"Buddhas relic", also call "Phra-That", means bone or the other part of body such as hair, nail, tooth, skin, blood, and etc. There is different characteristics from other ordinary people. The feature resembles substance which need to observed.

Buddha relic -? Buddha Relic? or? Phra That? Most of Buddha cremated bones found in Thailand, Sri Langka, China and Myanmar appear as mention in Tripitaka.

The kind of Buddha relic in Tripitaka.

According to Ajtakasumangkalavilassinee in Tripitaka, Phra Ajtakajarn has divided the kind of Buddha relics to 2 kinds as follows:

-Navip-Pakinna
That means Buddha relic which is an old form of appearance andsubstantially. They don t split or break down. There are 7 parts such as 1-forehead bone, 4-Phra Kiew Kaew and 2-collarbone.

-Vip-Pakinna
That means Buddha relic which split and became various small portion.They? dispersed in many worship place or temple.

This kind of bones is found only in India. England Government had given this Buddha cremated bones to Thailand two times.
1st In the fifth reign?? currently apear at Wat Srakesa
2nd -currently appear at Wat Phra Sri

So, many people said that if which place have Buddha relic and worship with well respect. They can take another Buddha relic to stay together.
-? Sacred monks Bone? or A-Ra-Hun Relics
Since Buddha lifetime until now. The great amount of monks can performed in the Buddha way. They can advance their mind to high level of meditation. As a result, Their part of body become? Phra That .
Since now, There are many monks who can practice the dharma until they became? Phra That? or A-Ra-Hun Relics. The relics can separate to 2 kinds as follow:
1.Disciple of Buddha in Buddha lifetime era. In the past, they have enumerated the kinds of Phra That of Buddhist saint amount of 48 Buddhist saints.
2.Disciple of Buddha in a half of the Buddhist era.? It started since 1957 until now. They are many monks and each become different kinds of Phra that. There are many studies in kind and changing procedure from each part of body to become? Phra That . Below are example pictures of various kind of Phra That in Thailand.
A group of Charcoal
Next, having a small spot like fish roes in white-gray color.
Fish roes grow up and become black-gray color.
Black-gray color changed to white color and Phra that size is larger.
Phra That becomes fully shape and look like corn seed.